We are taking all CDC recommendations to action in order to handle the COVID-19 pandemic to keep our students and staff safe.
Learn More

Boise, Idaho is ranked as one of the best places to live in the country.  With a myriad of educational options, four seasons of outdoor recreation, and one of the best places in the country to start a new business.  Boise is full of culture with many theaters and dining options and is a host to a great music scene.  At Aloft, we provide our clients with a balance of hard work and wholesome entertainment. 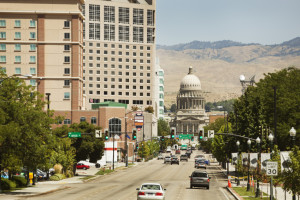 Boise is the capital and most populous city of the U.S. state of Idaho, as well as, the county seat of Ada County. Located on the Boise River, it anchors the Boise City-Nampa metropolitan area and is the largest city between Salt Lake City, Utah, and Portland, Oregon. As of the 2010 Census, the population of Boise was 205,671. It is also the 99th largest U.S. city by population. The 2012 U.S. Census Population Estimates that 212,303 people reside within the city. The Boise metropolitan area is home to about 616,500 people and is the most populous metropolitan area in Idaho, containing the state’s three largest cities; Boise, Nampa, and Meridian. Boise City is the third most populous metropolitan area in the United States’ Pacific Northwest region (behind only those of Seattle and Portland).

Downtown Boise is Boise’s cultural center and home to many small businesses and several high-rises. The area has a variety of shopping and dining choices. Centrally, 8th Street contains a pedestrian zone with sidewalk cafes and restaurants. The neighborhood is home to many local restaurants, bars and boutiques and supports a vibrant nightlife. The area contains the Basque Block, which gives visitors a chance to learn and enjoy Boise’s Basque heritage. Downtown Boise’s main attractions include the Idaho State Capitol, the classic Egyptian Theatre on the corner of Capitol Boulevard and Main Street, the Boise Art Museum on Capitol in front of Julia Davis Park, and Zoo Boise located on the grounds of Julia Davis Park.

Downtown Boise’s economy was threatened in the late 1990s by extensive growth around the Boise Towne Square Mall (away from the city center) and an increasing number of shopping centers, which have sprung up around new housing developments. Events such as Alive after Five and First Thursday were created to combat this trend.

To the south of downtown Boise is Boise State University and its surrounding environs. The area is dominated by residential neighborhoods and businesses catering to the student population. The unique blue playing field at the 37,000-seat Bronco Stadium on the BSU campus, home to the Boise State Broncos football team, is a major city landmark. Other cultural and sports centers in the area include the Velma V. Morrison Center for the Performing Arts and Taco Bell Arena. Broadway Avenue to the east and south of the BSU campus features many college-themed bars and restaurants.